A FAMILY AND A WAY OF LIVING THE BUSINESS

“My father founded Fenzi four months after I was born. Our family is permeated with business. We talk, eat and sleep business. We have always agreed on things, there has never been an argument. This is the strength of our story”.

These words come from an interview in 2011 with Glass Magazine and express the work-life philosophy of Dino Fenzi’s working career. A philosophy that became a family characteristic, as stated by Alessandro Fenzi, who is now at the helm of the company that he helped to grow with his father, making it the small multinational that it is today: “This is our family’s way of life, and has given us so much. However with one important difference: my father was able to keep business at the very center of his life, but he never let it impact the serenity of our family life. I try to use the same approach that my father taught me. Ever since I was a child I knew that I would have worked in the company, but until I actually started I didn’t know exactly what was made there and how.”

You are the third generation at the helm of the company business, what has your key role been and what will it be in the future?
“Let’s start by saying that my father drove the growth of the company, which began at the end of the 60’s. The company’s internationalization was all his doing, the result of his hard work and farsightedness. My role was to transform the company into a group, from a family-owned business to a company that was definitely more managerial. We are now present worldwide and have very talented managers at our branches who are very good at overseeing the business. I owe this achievement to my father who always pushed and supported me because, due to his age, he was of course unable to do this on his own. However, Fenzi Paints and Sealants Co. in China was his brilliant idea and one of his greatest achievements: he actually landed in China at the end of the 70’s, when the Chinese market opened, and grasped its huge potential. Fenzi China opened in 2006 and I can say that it is the worthy achievement of something that began 25 years before. ”

How will the future be?
“The company will continue to do what my father taught us to do, which means looking ahead, anticipating if possible. We posted good sales results during the first phase of the globalization process, during the second we relocated our production facilities so as not to lose out on market shares. This took time and effort, but it was the right thing to do. We anticipated things and started to expand before the others did. We will continue to do this.” 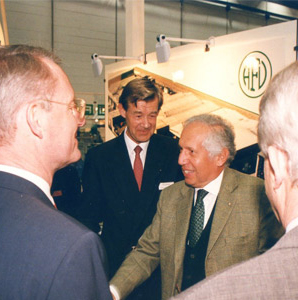 Among the most significant aspects, or rather the merits of Dino Fenzi’s career, the most outstanding is the effort he expended for the good of the sector he worked in. All the glass industry, in the broadest sense of the word, benefited from his efforts and his ability to recognize merits and competencies, when identified. Between the end of the 70’s and early 80’s, he offered his experience and enterprising spirit to the entire glass processing and transformation industry, to safeguard the interests of the sector and promote its growth on leading international markets and to drive the technological development that was later to determine its world leadership. Not an easy task, but carried out successfully by combining all the best resources.


Renata Gaffo, Director of Vitrum and Director of Gimav
“I have been always aware, that our mutual respect and consideration have been the solid ground foundation of our relationship, grown day by day for a 30 years' period. I felt strong and self-confident thanks to Mr Fenzi's support. I knew I could count on his help and advice. Now I feel lost. I know, life goes on and work too will go on, but nothing will be as before.”

Denise Sheehan, Vice President of Industry Events – National Glass Association
His word meant so much to me as I was learning to deal with all types in our industry both domestically and abroad - he was my challenge from the early 90's and all the members, but I always knew that if I could "win" Dr. Fenzi over I could count on his support and admiration. He was a man of his words and I to this day still believe in a hand shake, honestly, loyality and friendship".

Barbara Antonini, Sales Director of the family business.
“He was the driving spirit of behind Gimav; I don’t think he ever missed a meeting, even though the Group’s business often kept him on the rod or in the air. Milanese and wordly, he had a philosophy of life that he never hesitated to share and a mentality projected into the future. He still had a lot to give to the Association.”

Mario Sasselli, Director of Federvarie.
“I began working together with Dino Fenzi at Gimav in 1980 and worked with him ever since. He was a fine man professionally and as a person and it is very difficult to find the words to express my feelings and memories. I worked alongside him at Gimav until 1997 and then at Federvarie (formerly FAI) to the present, he believed in me for 35 years and honored me by asking for my opinion. Everything he passed on to me has become part of my life.”

TRIBUTES FROM THE GLASS INDUSTRY 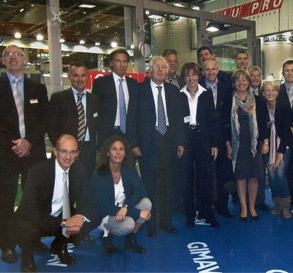 Co-workers, customers, partners, friends. It’s sometimes difficult to draw a line between one category and another. The many different people who were fortunate to share a more or less long period of their working life with Dino Fenzi for one reason or another, share the same feeling: total admiration for him as a man and as a businessman, with somewhat of a reverential fear that could be perceived deep down in everybody, and that is unavoidable because of the charismatic person that he was. So many touching tributes were received but only a few can be published here. All the tributes can be read in a special section of our website


Gino Valentini, Vetreria Valentini.
“I met Dino Fenzi many years ago, when we had started working in what was a fledging sector at that time, coming up against a great many difficulties. We helped each other from the very start which led to our companies cooperating closely, but also to a wonderful friendship with him and his family. As specialized producers of hollow glass, we worked a great deal together developing products, but he was not just a supplier, he was a true friend. He was a truly special person.”

Giorgio Sangalli, Sangalli Group.
“I’m 81, and come from a family that has always worked in the glass industry. In 1968 we were among the first to produce IG in Italy and then moved on to other glass processing work. We got everything from Fenzi, sealants, desiccants and paints. Dino Fenzi was our supplier for 30 years and we had a great relationship: he was a gentleman, a fine person. Wise, well-balanced, honest, and kind, he was definitely two steps above the others. His success and recognitions were well-deserved, it was a pleasure seeing him grow as a businessman.”

Hansruedi Mӓder, Prowerb St.Gallen AG
“I met Fenzi about 30 years ago when he was a supplier of sealants and was his business colleague ever since. Over the past 20 years especially, when we started working together, I got to know him better. I admired Dino Fenzi for how he was and for his determination, which brought great results to him and his company. He always found a way to be successful, even in a difficult industry.”

Mark Franklin, President of Saand Inc.
“I had the pleasure of knowing Dino as a supplier, a partner, a friend and a confidante for over 25 years. Dino was a unique renaissance man who had equal amounts of passion for his business, his family, his country and humanity. (…)Few successful business leaders like Dino, manage to achieve such a perfect balance between family, work, interests and personal pleasure. (…) His ability to see how his world of glass products fitted into the global economy gave him a unique insight as to which opportunities to follow and which risks to avoid.”

Javier Prado, Managing Director of Tvitec
“I received the unexpected, sad news of Dino Fenzi’s passing away on Monday morning. I carried the news with me all that day, remembering the person who I had the pleasure to meet and to have as a friend for 35 years. I always received words of support and appreciation from Dino, encouragement from a simple, modest and very humane man. As a businessman he was charismatic, hard-working and determined to make his products distinct from others in a difficult and highly competitive sector (…) I am certain that Dino knew his work would have continued after his death, and for this reason dying would not have been a concern to him (…).