Solar energy plays a primary role among the most innovative technologies for clean energy production. CSP (Concentrated Solar Power), as it’s universally called, is definitely the system with the highest growth potential.
In fact, despite reaching the same level of maturity as other technologies such as wind and photovoltaic energy, it has been widely used in the construction of about 50 energy production facilities around the world, mainly in desert areas where the sun is strong, and there is still a wide margin to improve its efficiency (energy balance).

Various methods are used to convert solar energy into thermal energy and therefore into electricity: this begins by using special mirrors that are fitted on a receiver to concentrate the solar radiation.
Existing power plants have mainly linear parabolic collectors that concentrate the sunlight by tracking the sun during the day and concentrate the solar radiation on a receiver tube that contains heat transfer fluids of various kinds. The heat that is accumulated, is transformed into steam which powers the turbine and electric energy is produced.
Another widely-used system is the so-called central tower power plant with ground mirrors concentrating the sunlight on a single receiver positioned at the top of the tower.

To date, the United States and southern Europe are the areas in the world that have invested most in this field, with an increase in the use of this technology expected in countries like China, India and South Africa in the very near future.

The Fenzi group has been investing in solar energy research in Italy for years now: the development of paints for solar mirrors at the Tribiano-based company goes hand in hand with progress in CSP technology over recent years, and has reached performance levels that far exceed international standards.

As a result, the “Research and Testing” section, as part of the “Glass, the Great Unexpected” exhibition at Vitrum 2015, was particularly interesting. Fenzi had the honor to help set up the exhibition of CSP technology, an area where it is a leader worldwide. In fact, solar mirrors are very special instruments that must guarantee a very high performance given their working conditions: very high working temperatures, very strong mechanical and abrasive stress.
From the very beginning, Fenzi has designed Duralux Solar Coatings to be products with exceptional features.

Here is what Pietro Ungarelli, head of R&D at Fenzi, had to say about the exhibition: “In the “Research and Experiments” section, the Fenzi Group presented next generation solar mirrors that were used for the construction of an Italian CSP (Priolo Gargallo).  Current research at Tribiano focuses on CSP systems technology with the production of Duralux  Solar Coatings that are designed to guarantee high chemical resistance to corrosion and UV rays. Many of our customers and the people who work with us, from Italy and worldwide, visited the company stand and were very happy to visit the exhibition as well: the combination of the company’s present and its future proved to be a winner. There was a great deal of interest from South America, especially Argentina (FENZI Argentina).
There is a great deal of interest at government level for all possible sources of renewable energy.
Last year, one third of government budgets were spent on fuel imports.
Future government policy should be addressed towards approving new budget laws for the funding of new projects such as CSP”. 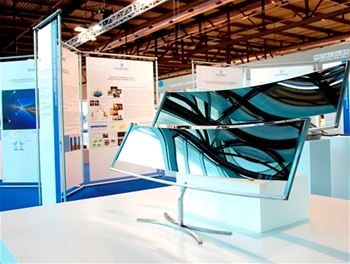