Fenzi South America, 20 years of success in the name of friendship

It was 1996 when the deep friendship and mutual respect between Dino Fenzi and Jacobo Soifer gave life to an entrepreneurial challenge that would bring remarkable success in the years to follow. The collaboration was initially established to support mirror manufacturers in Argentina, and later spread throughout the entire continent starting from Chile and Brazil, with the supply of Duralux paints.

Fenzi’s reputation as a company with excellent quality and complete dedication to glass has been known for some time now. The subsequent birth of Fenzi Argentina S.A. and its gradual emergence on the market has added further substance to the intuition of Dino Fenzi and the efforts of Jacobo Soifer, an expert on the local glass industry. They successfully managed to introduce the main Fenzi products into the South American market, in particular sealants for insulating glass. This beautiful story became even more riveting with the entry of Pablo Soifer, Jacobo’s son, into the Company, which in the meantime had become Fenzi South America. Pablo was able to unleash the great commercial potential existing in that market in rapid development, after the stagnation of 2002, although characterised by continuous hard-to-manage fluctuations.

Fenzi South America is now the main reference point for the entire South American industry, which despite its generally up-and-down economic situation, has a future full of very important investment opportunities in terms of energy savings and overall improvement of living comfort. In fact, the search for a higher level of thermal and acoustic insulation in homes and public buildings has become a priority in the economic development plans of South American countries. This was one of the themes discussed by Pietro Ungarelli, R&D Manager of the Fenzi Group, at the event organised by Fenzi South America at the Circolo Italiano of Buenos Aires to celebrate the 20th anniversary of the Group’s founding.

During this event, the CEO of the Fenzi Group, Alessandro Fenzi, expressed his appreciation for the excellent results achieved. “Special thanks goes to Jacobo Soifer, whose enthusiasm and optimism have enabled us to be here today to celebrate this important anniversary. We celebrate the friendship between Italy and South America, a friendship that symbolises the shared dedication to the glass industry. Each day, we produce the best technology available on the market today in our eleven factories worldwide.”

A shared feeling that reminds us of the emotional words spoken by Jacobo Soifer on the passing of Dino Fenzi in the fall of 2014: “Dino was not partner, he was a friend. We never argued, and together we always found the best solutions for our company. Dino’s support and trust during these 18 years have been priceless. We are proud of everything he has done for South America.” 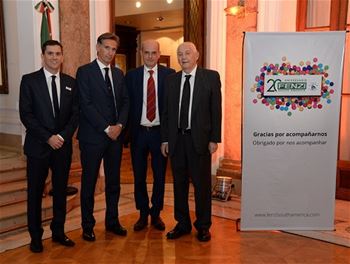