What must it feel like to prove, on the field, that you are the best Italian in the game? The answer is easy -- Fenzi knows that feeling well, and has for some time now. On the other hand, thinking about what is going through the mind of Marco Crespi after his brilliant performance at the Shenzen International on the European Tour of golf, it is difficult not to feel admiration and a certain degree of surprise at the amazing improvement in his sports results since the beginning of the year. After having been near the top of the leaderboard throughout the entire tournament, Marco Crespi finished in fourth place, earning the honor of best performance by an Italian in 2015. To tell the truth, the title of best Italian in the field is not new to him, since last year at the NH Collection Open in Spain, he brought in the only azzurra victory in the last two years. Some of his shots, although good, were not good enough to allow him to repeat that feat. But, today, satisfaction is running high and amply validates the Fenzi Group’s decision, taken early in the year, to renew its sponsorship contract that binds  Fenzi to Marco Crespi in the world of sports.

This tribute to Made in Italy -- a category where both Fenzi and Crespi are recognized for their excellence -- is even more interesting this year, in full-on Expo 2015 mode, placing Italy, and Milan in particular, at the center of global attention. And it is worthwhile pointing out once again that there is a common thread that strengthens and justifies this team commitment, as Fabio Fenzi, Director of the Fenzi Group’s Ceramic Paints Division remarks: “What we share with Marco Crespi is not only a friendship that grew out of a love of golf, but also a set of common values, like perseverance and always working to improve one’s performance. To us, this partnership between the Fenzi brand and Marco Crespi seems like an excellent example of the Group’s values.” 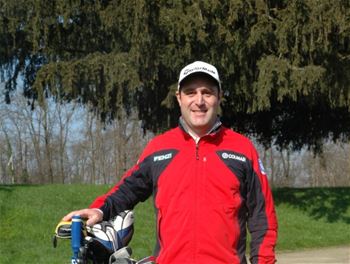