Thiover has always been the most successful Fenzi product, thanks to its simple use which allows it to adapt to all application methods, from robotic to manual, and its numerous attributes:
» mechanical properties with high elastic moduli designed for optimal preservation of the first-barrier sealant’s functionality, and thus the seal of the insulating glass;
» low permeability, to water vapor as well as gases;
» perfect adhesion to all types of glass and metal spacer bars;
» no danger for the operators or the environment.

Nevertheless, Thiover sealants belong to the family of organic products, and as such their primary "enemy” has always been ultraviolet radiation. As is well-known, the sun produces ultraviolet radiation. At altitudes above 80 km, the atmosphere completely absorbs only the wavelengths shorter than 200 nm, (UV limit), by interaction with the oxygen molecules still present at this height. Between altitudes of 10 and 50 km, on the other hand, the oxygen molecules disassociate (O2 → 2O.) and form molecules of ozone (O2+O. → O3).

Ozone, together with oxygen, is one of the main absorbers of ultraviolet radiation, but both fail to completely block its passage. Thus the radiation interacts with man and the environment. In the particular case of polysulfide sealants, the combined action of ultraviolet radiation, oxygen, heat and humidity represents a critical factor for the stability of the molecular structure, and the sealant may become detached from the substrate due to the breaking of weakened chemical bonds. The solar spectrum contains radiation in the ultraviolet field of various intensities and with energies comparable to the energies of some characteristic bonds of the polysulfide chain. The photochemical reaction mechanism involves the attachment of the atmospheric oxygen onto some carbon atoms of the molecular chain, with consequent oxidation and formation of hydroperoxides which are very sensitive to solar radiation. The subsequent breaking of the hydroperoxides by the UV solar radiation forces the chemical structure to restabilize by breaking the chain. As a result of this action, the sealant detaches from the glass substrate more easily following the traction and/or tangential stress characteristic of the insulating glass’s natural movement. Despite the fact that the Thiover sealants’ field of use is specifically limited to situations in which there is adequate protection against UV radiation, and thus the process described above is drastically minimized, Fenzi S.p.A. has nevertheless identified numerous determinant factors supporting investment towards a decisive improvement of the product:

1. A general increase in the ultraviolet radiation which, due to reflection and refraction, reaches the edge sealant of the insulating glass, as a result of both climate and design changes. Unfortunately, in the mid 80's the scientific world made one of its most important and disturbing discoveries: the shrinking of the ozone layer over the Antarctic region, due mostly to the use of chlorofluorocarbons (CFC), in combination with climate changes has led to an increase in ultraviolet radiation. The new parameters required by the building industry regarding improved energy efficiency are encouraging the design and use of doors and windows with minimized heights that reduce the thermal transmission (Uw) of the window but expose the sealant to greater amounts of ultraviolet radiation.
2. The desire to protect our customers through improvement even when the insulating glass has not been installed up-to-standard, thus increasing the exposure of the Thiover sealant to the combination of risk factors cited (ultraviolet radiation, heat and humidity).
3. European Regulations and Voluntary National Marks.

Since the beginning of its drafting and approval, the European Community Standard EN 1279-4 which determines the minimum resistance for the sealants used in our sector has been considered by many operators as unable to guarantee long-lasting life of the products under the action of ultraviolet radiation. In fact, it requires verification of the mechanical properties and adhesion to the glass after a UV exposure of only 96 hours without the presence of humidity. Some European countries like France and Belgium virtually allow, through Voluntary National Marks, the use of only those sealants that have passed decidedly much more rigorous ageing tests. In fact, the FENZI S.p.A.’s minimum requirements for Thiover sealants have always been based precisely on these tests, using them continuously as a test bench for the improvements which we will describe in this article.

FRANCE – CEKAL Mark (Method NFP78-451) This test includes the combined action of heat, humidity and ultraviolet radiation for 6 weeks and the determination of the load values and deformation after traction. The traction data according to CEKAL regulations indicate that, with practically the same starting point in terms of normal load (tensile stress) and deformation (tensile strain) characteristics, at the failure for glass-sealant-glass samples, the UV conditioning is supported better by the THIOVER 2010 product than the standard. In particular, it goes from a load/deformation ratio just above the AB limit line to values far beyond the limits imposed by the test. 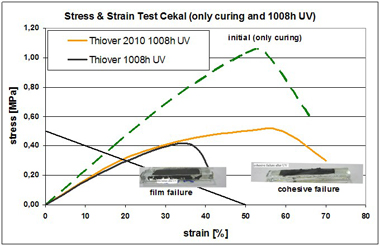 The following bar graph shows the differences for the tests carried out on THIOVER and on THIOVER 2010:

To confirm an effectively improved resistance to the radiation in the presence of heat and humidity, the different types of failure on the substrate at the end of the traction (failure of the sealant) have been compared: In most of the tests, even though THIOVER always remains for the most part attached to the glass, the thickness of the material is very similar to a skin. A film-type failure such as that in the figure shows that the attack by the UV radiation in conjunction with the other agents (heat and humidity) occurs mainly near the substrate. The chemical bonds break more easily since they are not supported by more efficient stabilizers and/or UV retardants.

In the case of THIOVER 2010, the enormous work of the anti-UV agents included in the formula guarantee a better barrier against the radiation. The sealant fails a few millimeters from the surface, indicating that the bonding is stronger near the substrate. Furthermore, the surface detachment areas show the presence of residual sealant.

BELGIUM – BCRC INISMA Mark (Method UBAtc 04.03.C) This test includes the combined action of heat, immersion in water and ultraviolet radiation for one week and the comparison of the failure load values obtained before and after ageing. These limits must not be less than 30% the initial characteristic values of the sealant. The type of failure from the substrate is also evaluated. This test, unlike the CEKAL procedure, includes tangential traction (shear stress) for samples glued onto various substrates (glass-glass, galvanized steel-glass and aluminum-glass). The graph below illustrates the traction data obtained according to the UBAtc procedure (BCRC INISMA) for the Thiover standard and Thiover 2010.